UTLC ERA attended at the SiTL 2019 in Paris 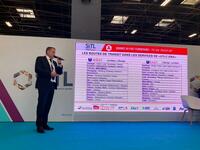 The President of UTLC ERA Alexey Grom presents at the SiTL in Paris the ERAI index (Bildquelle: @ UTLC ERA)

Paris, 27 March – Alexey Grom, the President of the JSC United Transport and Logistics Company – Eurasian Railway Alliance (UTLC ERA) told the representatives of business and the media about the need to increase cooperation with European carriers and presented the Eurasian Rail Alliance Index (ERAI) at the 36th International Exhibition of Transport and Logistics in Paris.

The potential of rail transport on the New Silk Road is high: in 2018, the volume of transit container traffic between Europe and China increased by about a third compared with 2017 and amounted to 370 thousand TEU in both directions. Today, when the distances are reduced due to the increase in speed, and the volume of railway transit along the Eurasian corridor is increasing every year, the UTLC ERA, which carries out 76% of all container traffic in this area, is striving to create a network of workable partnerships in Europe. Guided by this task, the company at the Exhibition of Transport and Logistics in Paris presented the initiative „#UE4EU“ -UTLC ERA for European Union“, aimed to develop long-term relations with European transport and logistics companies in the 1435 mm space. „It is necessary to find a common language, set common goals and build a cooperation route,“ said Alexey Grom, communicating with the media.

Transit traffic on the China-Europe route and in the opposite direction became competitive largely due to the high speed of delivery and optimal service tariffs. According to the president of the UTLC ERA Alexey Grom, these two advantages are clearly illustrated by the value of the ERAI index. The main goal pursued by the company in developing the index is to increase customer awareness of the cost of rail transit along the 1520 gauge, and in the future to use the index when making settlements with logistics companies and shippers in the Eurasian space. The value of the ERAI index depends on the level of infrastructure tariffs of carriers, the speed of cargo delivery by rail, the capacity of the infrastructure and many other indicators of transportation. Today, the shipper will be able to independently calculate online the cost of transportation costs from China to Europe and decide on the choice of mode of transport.

The premiere of the ERAI index in France was preceded by international recognition of the role of Eurasian rail transit: the ERAI index was included in the February issue of the Sea and Air Shipper Insight report, prepared by leading independent international analytical agency Drewry. The document compares the ERAI index with the global Drewry World Container Index, which represents the cost of shipping, and concluded that the price of rail transportation is less prone to fluctuations than the price of sea delivery.

The SiTL 2019, Semaine de l’innovation Transport & Logistique, is held at Port de Versailles in Paris, one of the largest exhibition centers in Europe, and is a large-scale specialized annual event in the field of transport and logistics for French and European shippers. In 2019, about 600 exhibitors from fifty countries took part in the event, while the share of international companies on a platform with stands occupied more than 30 per cent.